Why is supply chain risk management important? Why should CEOs and CFOs care?

Over the past two years, I’ve addressed those questions in various posts (see links below), but you have to look no further than Chipotle’s Q4 2015 financial results for the answers. Compared to Q4 2014:

The company’s stock price has also plummeted 39 percent over the past four months, from about $750 per share on October 12, 2015 to about $457 per share this morning. 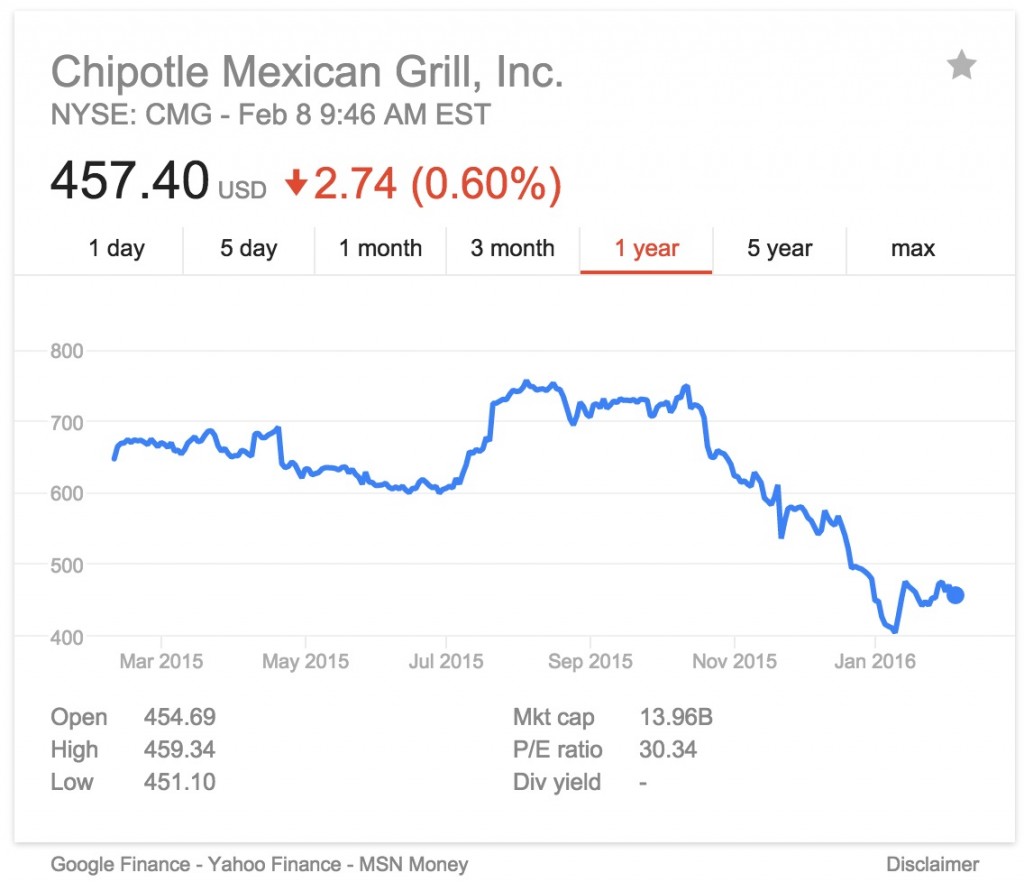 As is well known by now, this quick reversal of fortune was caused by two E. coli outbreaks that sickened 60 customers, along with norovirus incidents in California and Massachusetts that led to more sick customers and restaurant closings.

“The fourth quarter of 2015 was the most challenging period in Chipotle’s history,” said Steve Ells, founder, chairman and co-CEO of Chipotle. Since the outbreaks, the company has taken aggressive action to improve its food safety practices, and it will close all of its restaurants today (February 8th) for four hours to hold a company-wide staff meeting about food safety.

A key priority for Chipotle moving forward has to be improving its supply chain visibility, which based on comments reported in the Wall Street Journal last week, appears to have some blind spots. According to the article:

As Chipotle and health authorities sought answers, they were often out of sync. The CDC’s Matthew Wise [who heads the CDC’s outbreak-response team] said Chipotle’s distribution records posed a challenge. He declined to offer specifics but said “having traceability from field to slaughterhouse to restaurant can help facilitate traceback. Chipotle has articulated plans on their end to make that system more robust.”

[Chipotle spokesman Chris Arnold] said Chipotle has provided investigators detailed records, adding “we are not aware of any issues.” It recently began requiring suppliers to label shipments with item numbers that get scanned at distribution centers. Soon, he said, restaurants will have similar scanners to better track incoming items.

This is yet another example of how past performance is no guarantee of future success, of how companies cannot succeed anymore despite having all sorts of inefficient practices in place, including having poor visibility and control of their supply chains.

In this case, Chipotle had been succeeding for years without suppliers labeling shipments with item numbers, without scanning those items at its distribution centers, and without scanning incoming items at its restaurants. These are all basic supply chain and logistics practices that you would think a multi-billion dollar company like Chipotle would have had in place already, but as I’ve learned repeatedly over the years, company size and having a leading brand don’t necessarily equate to supply chain sophistication and excellence (see, for example, Home Depot sending orders via fax).

Another priority for Chipotle has to be improving its supply chain risk management capabilities, which is one of six fundamental disciplines for achieving supply chain excellence.

In a recent webcast — Supply Chain Leaders Build Resilient Supply Chains — Mike Glodziak, President of LEGACY Supply Chain Services, and I discussed the importance of supply chain risk management, supply chain design, and supply chain mapping and visualization, and we presented leading practices in these areas. The webcast was the third in a series we did focused on the six supply chain disciplines companies must master to drive profitable growth, which was also the focus of an e-book we published last year. I encourage you to watch the webcasts (links below) and read the book for all the details and insights, but here is one of the slides I presented in the webcast: 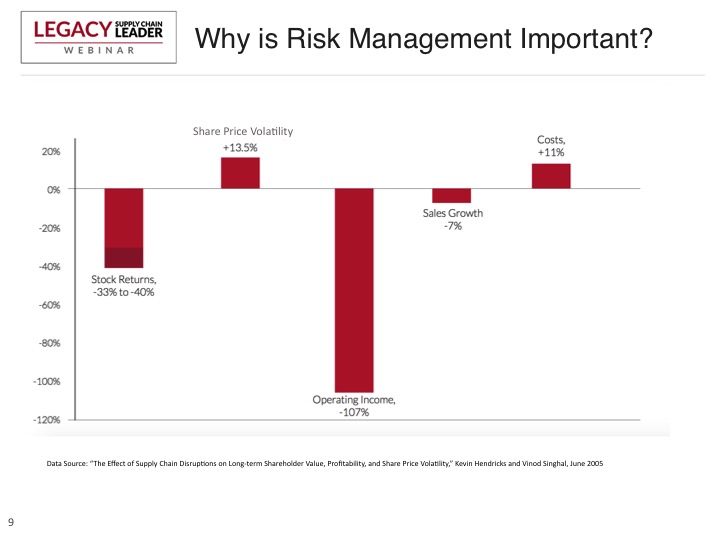 The chart above looks a lot like Chipotle’s Q4 2015 results, doesn’t it?

The data is from a 2005 research paper by Kevin Hendricks and Vinod Singhal on “The Effect of Supply Chain Disruptions on Long-term Shareholder Value, Profitability, and Share Price Volatility.” According to the researchers:

Firms suffering from supply chain disruptions experience between 33 to 40% lower stock returns relative to their benchmarks over a three year time period that starts one year before and ends two years after the disruption announcement date.

Simply put, preventing a similar chart of negative results for your company is the main reason why supply chain risk management matters.