I’m at Heathrow airport waiting to board my flight back to Boston, which is delayed by over an hour so far. I’ve spent most of this week in Dorking, England (not far from London) meeting with executives from Paragon Software Systems and several of its customers (I’ll share my takeaways from the visit, including my video interviews with clients, in a future post). Although I’ve been to London before, this was my first time experiencing something no visitor to the city should miss: getting stuck in traffic on the M25. 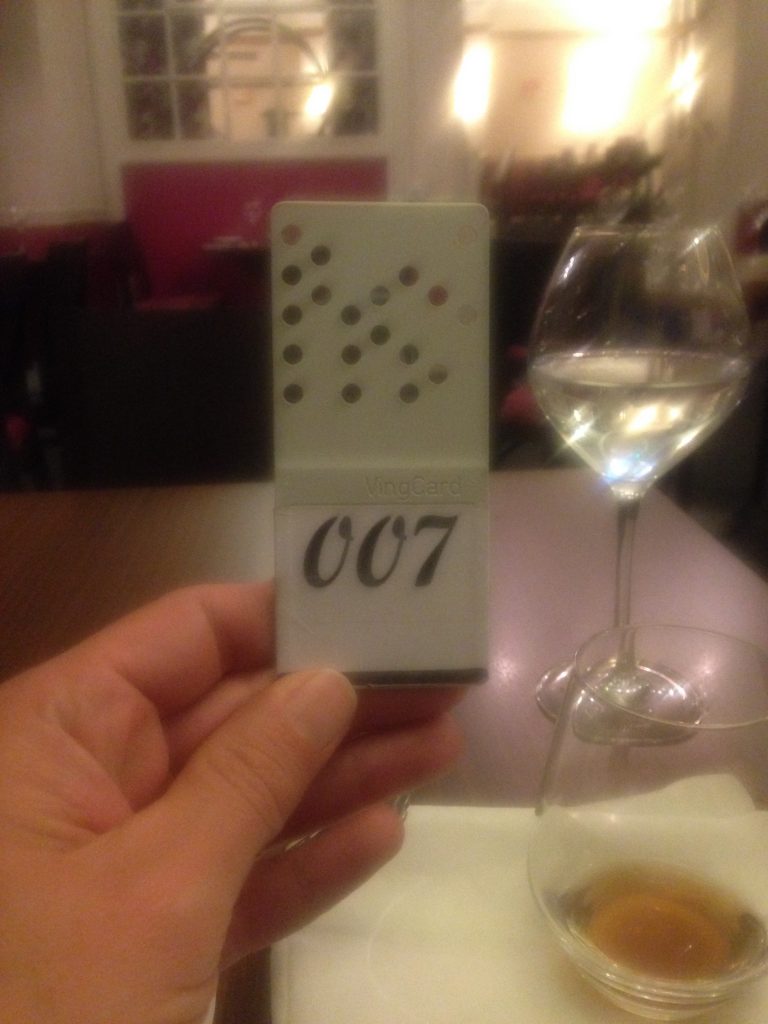 Mention the M25 to anyone there and you get the same reaction: Ugh! You get on the M25 and before long you have a front seat view of the biggest transportation challenge facing companies in England and many other countries around the world: traffic congestion.

On the lighter side, based on the key I was given when I checked in at the hotel, it appears that Gonzalez is the new Bond.

I’ll be back across the pond next week to present at Quintiq’s World Tour London event. The title of my presentation is “A Brave New World: How to Achieve Optimum Supply Chain Performance in a World of Drones, Driverless Trucks, 3D Printing, and Other Emerging Technologies.” With driverless trucks and 3D printing making the news again this week, it seems like I will need to update my presentation again.

Back in May 2004, I wrote a post titled, “What If UPS Acquires Manhattan Associates?” I used that hypothetical headline to highlight a trend I saw in the industry: the convergence of logistics services, technology, and consulting. Five years later in 2009, I also predicted that a leading logistics service provider would acquire a leading logistics software company. That prediction never came true. Nonetheless, we continue to see the convergence of business models, and if the story in yesterday’s Wall Street Journal is true, Amazon acquiring a transportation management system (TMS) vendor could be the latest example. According to the article by Erica Philips:

Amazon.com Inc. is on the hunt for technology to help it run its rapidly expanding freight-transportation network, according to people at companies that have been contacted by the retailer.

Amazon is looking to license or acquire technology that could find the most efficient shipping routes and hire fleets of trucks, ships and planes to move sellers’ goods. In the last two weeks, Amazon has reached out to several freight-services-technology companies requesting information about their offerings, people at the companies said.

Why would Amazon even consider buying a TMS vendor instead of just licensing or subscribing to a third-party solution? For the same reason it acquired Kiva several years ago, and for the same reason it has been investing in its own truck fleet, drones, and freight forwarding capabilities: its desire to own and control the innovation cycle — from the front end of its operations (website) to its back end (order fulfillment, DC automation systems, and final delivery) — in a holistic and integrated manner.

Here is what I envision Amazon saying: “By bringing together our front-end and back-end systems and operations and innovating them in a holistic and integrated manner, we’ll achieve even greater levels of productivity and profitability, and provide even better and more differentiated service to our customers.”

No sense speculating any further at this time. If Amazon does acquire a TMS vendor, we’ll learn about it soon enough.

Moving on to driverless trucks, a group of former senior Google employees launched a startup called Otto that aims to convert existing trucks into driverless ones.

Here’s an excerpt from a blog post by co-founders Anthony Levandowski and Lior Ron:

To speed the adoption of self-driving technology, we began by equipping existing trucks on the road with our unique self-driving kit, designed to empower truck drivers to drive more safely and efficiently. We are developing a suite of sensors, software and truck enhancements coming together in a product that can be quickly outfitted on existing trucks. Testing the technology is currently underway on highways with our research fleet, and we recently completed an autonomous demo of the technology on a public highway. We intend to enhance the capabilities of the Otto truck, collect safety data to demonstrate its benefits, and bring this technology to every corner of the U.S. highway system.

This follows last month’s demonstration of the European Truck Platooning Challenge, where “six brands of automated trucks – DAF Trucks, Daimler Trucks, Iveco, MAN Truck & Bus, Scania and Volvo Group – have been driving in columns (platooning), on public roads from several European cities to the Netherlands.” See the video below:

Simply put, the technology for driverless/autonomous trucks continues to progress rapidly, but plenty of regulatory and legal hurdles remain. As reported in the Wall Street Journal this week, a group of business and former military leaders, including FedEx CEO Fred Smith, are calling for “sweeping federal legislation to avoid a patchwork of rules they believe could hinder adoption of the technologically advanced vehicles.”

Finally, in the 3D printing realm, UPS announced that it will launch “a distributed, on-demand manufacturing network that links its global logistics network with 3D printers at The UPS Store® in more than 60 locations around the U.S. and Fast Radius’ On Demand Production Platform™ and 3D printing factory in Louisville, KY.” As part of the initiative, UPS is partnering with SAP to integrate SAP’s supply chain software into the network. As described in the press release:

Customers will visit the Fast Radius website (formerly CloudDDM) to place their 3D printing orders, which will be directed to the optimal manufacturing or The UPS Store location based on speed, geography, and the product quality the customer requires. Orders can be shipped as early as same day. While participating The UPS Store locations are all in the U.S., companies globally could utilize the network and place orders.

Song of the Week: “Panic” by The Smiths

PrevPreviousAre You Ready to Leverage Parcel to Support Your Transportation Goals?
NextMaking Internet of Things (IoT) Work in Supply ChainNext