Those are the names of the four tooth fairies that have visited our house over many years, and on Tuesday, my youngest daughter’s tooth fairy, Sparkles, made her last visit.

A failed pick-up and delivery at 3:00 am: My daughter woke up, Sparkles’ true identity revealed.

The worst part wasn’t the tears later that morning, but afterwards, after dropping her off at school, realizing that she won’t write another letter to the tooth fairy, with her smart questions (“What do you do with all the teeth?”) and polite requests (“Can you leave me some fairy dust?”), and the sad realization that there will be no more letters from Sparkles either, written in old-school cursive, revealing secrets from Fairyland.

In this age of texting, emailing, and Snapchats, the tooth fairy is what kept letter writing alive in our house. What now?

Amazon continues its streak of grabbing the headlines, with news this week of another patent issued and its plans to invest $1.49 billion to build a large air cargo hub in northern Kentucky.

As reported by NBC News, Amazon was granted a patent “for a robot that can pack orders, potentially speeding up the fulfillment process.” Here is one example described in the patent: 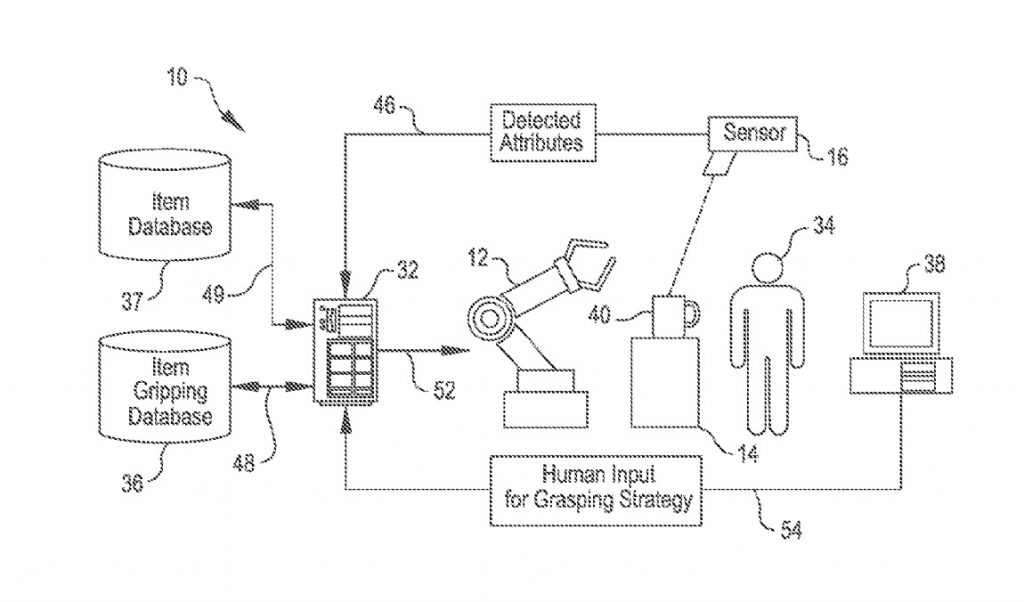 In an illustrative example according to one embodiment, a robotic arm is positioned within reach of a tray. A human operator loads the tray with an inventory item (for example a coffee mug) that is to be grasped by the robotic arm and moved into the appropriate box from a group of boxes that are awaiting ordered items for shipment to customers. The mug in the tray is identified according to a unique identifier number, such as by a scanned barcode or radio frequency identification tag. The unique identifier of the mug is used to access a record about the mug from an item database to determine a stored weight and a stored digital model representing the shape of the mug. A camera or other optical imaging device scans the mug, providing information about the mug’s orientation, e.g., in this case that the mug is on its side with the open top facing the camera and the handle to the right. The weight, shape, and orientation of the mug are collectively used with any other relevant and/or available information (e.g., about the size and orientation of the box into which the mug is to be placed to fulfill the order) to query a grasping strategy database for a grasping strategy appropriate for this situation. Assuming multiple strategies are available, the highest ranked strategy is accessed, which in this case causes the robotic arm to use a vacuum end effector (rather than an electromechanical pincher that is also available), approach the mug from the open top to grasp the mug on the bottom inside of the mug using 60% of the robotic arm’s suction capacity, and rotate while moving toward the target box so that the mug is set down with the bottom facing down and the handle aligned in the foam slot specially formed in the left side of the box to receive the handle. Alternatively, assuming that no strategies are available for this situation, new grasping strategies may be generated.

Amazon has been hosting a robot picking challenge for the past couple of years (see my June 2015 post, “Amazon Tests Robots for Warehouse Item Picking,” and the video of last year’s winner), so this patent is not surprising.

I’ll repeat what I said back in 2015: When it comes to robots and automation technology in supply chain and logistics, we are rapidly progressing through the Seven Stages of Robot Replacement that Kevin Kelly wrote about in a WIRED magazine article published in December 2012:

In the coming years our relationships with robots will become ever more complex. But already a recurring pattern is emerging. No matter what your current job or your salary, you will progress through these Seven Stages of Robot Replacement, again and again:

1. A robot/computer cannot possibly do the tasks I do

3. OK, it can do everything I do, except it needs me when it breaks down, which is often.

4. OK, it operates flawlessly on routine stuff, but I need to train it for new tasks.

5. OK, it can have my old boring job, because it’s obvious that was not a job that humans were meant to do.

6. Wow, now that robots are doing my old job, my new job is much more fun and pays more!

7. I am so glad a robot/computer cannot possibly do what I do now.

I believe we are currently between Stage 2 and Stage 4 in many supply chain and logistics areas. How long until we get to Stage 5 and beyond? Post a comment and share your perspective.

Moving on to technology news, JDA announced that chairman and chief executive officer Bal Dail is stepping down and that the company’s Board of Directors has appointed former Tyco executive Girish Rishi as the company’s new CEO. This follows the company’s announcement last week that it experienced “strong customer momentum closing 2016 with major global customer signings across its key manufacturing, retail, third party logistics (3PL) and wholesale distribution industry segments,” with 83 customers going live with their JDA deployments globally during the second half of 2016. And it follows the announcement last August that JDA had received a $570 million equity investment from Blackstone and New Mountain Capital.

What does this all mean? It underscores how competition and transformation in the supply chain software market continues to intensify, and how traditional leaders like JDA need to keep pace with customer expectations and innovation — and also not be afraid to disrupt themselves and keep questioning the status quo.

Also this week, 3Gtms and TranSolutions announced “a new technology and mutual referral partnership [that] includes creation of direct integrations between the systems, to speed up and simplify the claims process.” Freight claims is one of those “white spaces” in transportation management that TransSolutions addresses with its solution. It’s not sexy, it doesn’t require sophisticated optimization, but when you step back and look at the time, cost, and effort many companies spend filing and processing freight claims — usually via paper and phone calls — there’s considerable opportunities here for cost savings and productivity improvements. For 3Gtms, like other technology vendors, the question when it comes to filling these white spaces is “Do we build, buy, or partner?” and in this case, considering the company’s strategy and other R&D priorities, partnering was the smart approach.

The growth of managed services validates a trend I’ve been writing about for years, summarized best by the title of this November 2015 post: What Do Shippers Want? The Right Mix of Technology, Managed Services, and Advice.

Song of the Week: “Where’s the Revolution?” by Depeche Mode