I remember going to my first computer lab as a young teenager in high school. We sat in front of TRS-80 computers (“Trash 80s” as we called them) and learned how to write a simple program in BASIC. If I remember correctly, my program counted to 10. 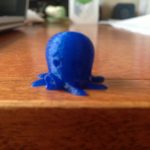 Yesterday, I brought my two oldest kids (ages 13 and 11) to the computer lab at our public library. They were participating in a free, two-hour class on 3D printing, where they and other kids learned to design a simple object using CAD software and then printed them using a MakerBot 3D printer. They brought home an octopus.

On to this week’s news…

Earlier this week, I wrote about how logistics executives are looking for “flexible” solutions to manage their ever-changing operations. The use of temporary labor — either directly or via third-party logistics (3PL) providers — is one example. Using temporary or contingent workers enables companies and 3PLs to flex their operations up or down as needed. Last June, the US Labor Department reported that there are 2.7 million temp workers in the country — the most ever and growing 10 times faster than private-sector employment. And according to a June 2013 Time article on the temp labor industry, “1 in 5 manual laborers who move and pack merchandise is now a temp.”

Simply put, the use of temporary labor is widespread and important in logistics, which is why SAP’s acquisition of Fieldglass caught my attention. According to the press release:

I don’t know if Fieldglass has any clients in the 3PL industry, but logistics service providers certainly have a need for this type of solution, especially those with warehousing operations. It wouldn’t surprise me if SAP started marketing this solution to 3PLs in the near future, bundling it with its warehouse management system (WMS), for example.

(It’s worth noting that there are negative aspects to the growing use of temporary labor, including low wages and safety concerns, as the Time article and this August 2010 story in the New York Times point out.)

On the cross-border trade front, severe weather in January led to a 3.4 percent decline in US-Canada trade for the month compared to January 2013. According to the Bureau of Transportation Statistics, “trade using truck, the largest mode, declined 4.9 percent while rail dropped 9.9 percent.” Weather wasn’t an issue, however, on the southern border. U.S.-México trade rose 3.9 percent from January 2013, “the seventh consecutive increase from the same month of the previous year.”

Finally, the trucking industry is taking action to change its public image by launching “Trucking Moves America Forward,” an industry-wide image and education initiative “informing policy makers, motorists and the public about the benefits of the trucking industry to help build a groundswell of political and grassroots support necessary to strengthen and grow the industry.” The initiative is supported by “a diverse group of industry influencers including leading executives, professional truck drivers and technicians.” Here’s a quote from the press release:

“Today’s modern truck drivers are skilled professionals and devoted family men and women, trained to focus on safety, efficiency and reliability while operating the safest and most sustainable trucks we have seen to-date,” said Steve Ponder, chairman, Trucking Moves America Forward and vice-president of Great West Casualty Company. “Trucking is an important industry to our country, nearly every consumer good touches a truck along its journey and we are excited to share what makes trucking so special with the American people.”

I believe it’s important for the American public to understand the important role trucking plays in our economy and lives. The industry certainly deserves more recognition and respect from the general public, and it needs to attract more people to join the profession. The conversation starts to get difficult, however, when questions about driver pay and lifestyle come up. It’s still a hard sell.

Song of the Week: “Snap Out of It” by Arctic Monkeys