I’ll spare you the full story, but back in college I took a creative writing class, and the professor gave me a unique assignment: write a monkey poem every day. I only remember this one, my favorite:

In the middle
of the desert sits a monkey
on a watermelon. He just doesn’t
know it.

I always dreamed of having a painting made of that poem, and my dream came true last night when my youngest son gave me this birthday present he made for me: 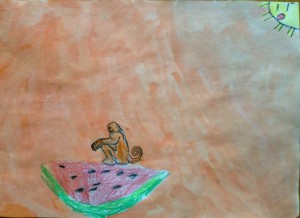 In this week’s news…

XPO Logistics continues its roll-up strategy with its announced acquisition of New Breed Logistics this week for $615 million. Here are some details from the press release:

New Breed processes over 275,000 orders per day – typically premium, high-value products – through 71 facilities, and employs approximately 6,800 people. After closing, XPO expects to have approximately 10,000 employees and more than 200 locations.

This acquisition is yet another example of the convergence taking place in the 3PL industry, as providers — through the integration of logistics services, coupled with geographic and vertical industry expansion — fend off the risk of commoditization by positioning themselves as one-stop-shop (or end-to-end) solution providers.

Side note: 3PLs have historically received a bad rap for being behind the technology curve, but in reality, some 3PLs actually have more IT people and spend more in R&D than many software companies! XPO makes reference to its IT capabilities in the press release:

Both XPO and New Breed have an intense commitment to cutting edge technology. The combination will double XPO’s IT workforce to approximately 600 talented, forward-thinking IT professionals innovating new ways to serve customers.

That said, not all 3PLs are created equal when it comes to IT. So, how can you determine if a 3PL is ahead of the curve? Read my post from February where I highlight five factors you should consider when evaluating the IT capabilities of 3PLs.

In other M&A news, Zipments acquired NYC-based Hobson, which is “a ship-from-store concierge delivery service offering retailers a one-stop solution for same-day (or next day) delivery of online orders and in-store purchases.” Hobson has partnerships with 200+ local and national retailers in New York City, including Aldo, The North Face, and Kenneth Cole.

As I’ve noted before, the race is on in the same-day/local delivery space, with various Davids (like Zipments) and Goliaths (like Amazon, Google, and eBay) battling it out. For most of the players, the goal at this stage is to grow their delivery and commerce networks, starting in a few, high-density cities. What we’re seeing in this Zipments-Hobson deal is the coming together of a courier network with a retailer network, two very important pieces of the puzzle. I expect to see more deals like this in the months ahead, as the race continues toward the ultimate goal: doing same-day delivery profitability on a large scale.

Speaking of profitability, Amazon is reportedly offering Prime customers Instant Video credits if they choose the slowest delivery option (because despite all the buzz, not everybody wants same-day or even next-day delivery). Customers who are willing to wait 5-7 days for their order will receive a $1 credit they can use to buy or rent anything on Amazon’s Instant Video site or app. While some commentators are saying this is a move to drive more customers to use Amazon Instant Video, those of us in logistics know the real reason: the slower the delivery option, the cheaper the delivery cost, and so this is really an attempt by Amazon to rein in its fulfillment costs, which contributed to the company’s second quarter net loss of $126 million.

Finally, after more political drama this week, Congress passed a $10.8 billion bill last night to keep the Highway Trust Fund afloat through May 2015. I’m betting we’ll see the same drama again in the spring, and although we’ll have a new Congress, they’ll do what all the others have done to date: kick the can further down the road on developing a long-term funding solution.

Song of the Week: “Everybody’s Changing” by Keane