Driverless vehicles and package delivery dominated the supply chain and logistics news this week, so let’s go straight to it:

That’s the essence of a new patent issued to Google this week for an “Autonomous Delivery Platform.” Below is the abstract and a drawing from the patent: 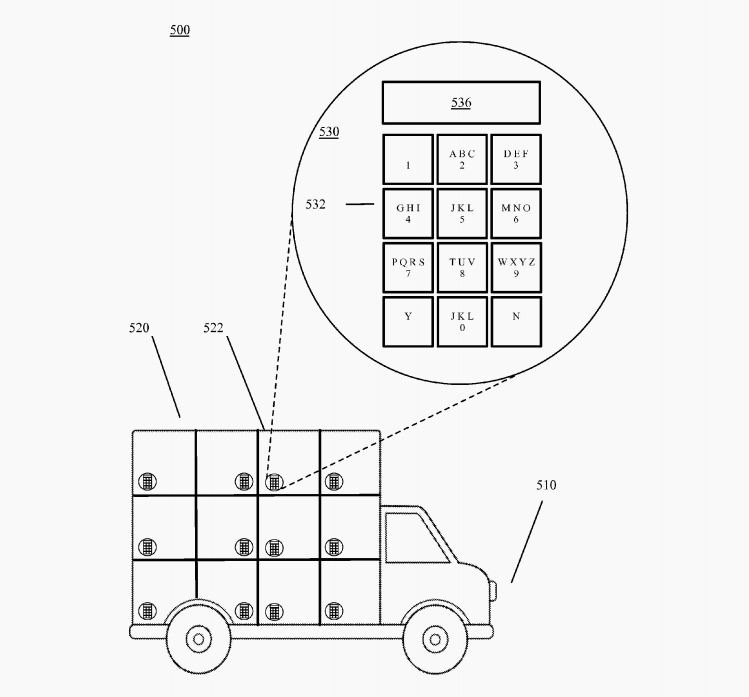 In short, it’s actually a “delivery locker on wheels” (think Amazon Locker or DHL Packstation) that autonomously drives itself along a delivery route, and upon arriving at a destination, customers enter a code (or use a credit card or other payment device) to unlock a compartment and retrieve their package.

What if a person is not there to enter the code or pay to retrieve the package? Well, I guess that’s the Achilles’ heel of this delivery model.

Drones. Driverless vehicles. Package lockers. 3D Printers. As Google, Amazon, and DHL are demonstrating with their patents and pilot tests, there are many different ways you can leverage these emerging technologies to create new delivery models — each one interesting and exciting, each one with its own strengths and weaknesses. The only thing I know for sure is that the reality we’ll find ourselves in 10 to 20 years from now will be very different than what we imagine today. For related commentary, see Amazon’s 3D Printing Trucks: A Quixotic Quest for Zero Delivery Time? and my commentary about Google’s other patent (“Automated Package Delivery to a Delivery Receptacle”) and DHL’s drone and parcel locker delivery model.

Back in June 2009, I wrote the following in a post titled Amazon.com: A Customer-Centric 3PL: “You won’t find Amazon.com on any ‘Top 25 3PLs’ list, but the company is a leading 3PL in my book.” Fast forward to today and it’s clear that Amazon is putting the pieces together to become a dominant logistics service provider. According to internal documents reviewed by Bloomberg News (as reported in the article linked above):

A 2013 report to Amazon’s senior management team proposed an aggressive global expansion of the company’s Fulfillment By Amazon service, which provides storage, packing and shipping for independent merchants selling products on the company’s website. The report envisioned a global delivery network that controls the flow of goods from factories in China and India to customer doorsteps in Atlanta, New York and London. The project, called Dragon Boat, is proceeding, according to a person familiar with the initiative, who asked not to be identified because the information isn’t public.

Amazon’s plan would culminate with the launch of a new venture called “Global Supply Chain by Amazon,” as soon as this year, the documents said. The new business will locate Amazon at the center of a logistics industry that involves not just shippers like FedEx and UPS but also legions of middlemen who handle cargo and paperwork associated with transnational trade. Amazon wants to bypass these brokers, amassing inventory from thousands of merchants around the world and then buying space on trucks, planes and ships at reduced rates. Merchants will be able to book cargo space online or via mobile devices, creating what Amazon described as a “one click-ship for seamless international trade and shipping.”

Based on recent actions by Amazon — such as leasing jets, buying truck trailers, and Amazon China registering with the U.S. Federal Maritime Commission to become a licensed ocean freight forwarder  — it seems like the company is well on it’s way to executing this plan.

Does it make sense for Amazon to play a more direct role in logistics? Will it succeed? I’ll share my thoughts in a future post, but in my opinion, the answers depend on whether or not you believe in the transformative power of the network effect.

Finally, in other deliver-related news, “Newspaper giant Gannett Co. is exploring the parcel-delivery business as it examines how to make the most of its fleet of paper carriers and delivery trucks,” according to an article in the Wall Street Journal. Here are some more details from the article:

Prompted by the e-commerce boom, Gannett reached out to parcel-industry consultants as recently as December. It also had meetings and preliminary discussions with Amazon.com Inc. as it explores delivery possibilities, according to one of those people.

But while parcel delivery is an option the company is considering, it faces a major obstacle: The company would lose certain tax breaks if its carriers were to deliver a significant number of packages…Depending on who owns the delivery fleet, either outside contractors or newspapers receive significant federal tax breaks related to paper deliveries. But those are contingent on a minimum of 90% of a carrier’s income coming from delivering papers. Deliver too many packages, and those tax breaks go away—something [Tribune Publishing Company] determined would be too big a loss to offset with the added package revenue.

Simply put, as the e-commerce pie continues to grow and drive demand for parcel deliveries, everyone is looking for a big tasty slice of it.

Song of the Week: “Infamous” by Basia Bulat

PrevPreviousThe Impact of SOLAS on Ocean Shipping and Data Management
NextOmni-channel: Not A One-Size-Fits-All ApproachNext