Getting the Balance Right on IT Investments

Federal legacy IT investments are becoming increasingly obsolete: many use outdated software languages and hardware parts that are unsupported. Agencies reported using several systems that have components that are, in some cases, at least 50 years old. For example, the Department of Defense uses 8-inch floppy disks in a legacy system that coordinates the operational functions of the nation’s nuclear forces. In addition, the Department of the Treasury uses assembly language code—a computer language initially used in the 1950s and typically tied to the hardware for which it was developed.

The Office of Management and Budget (OMB) directs federal agencies to break down IT investment costs into two categories:

Guess which category gets the lion’s share of IT budgets?

As the chart below illustrates, 76 percent ($61.2 billion) of the total goes to O&M expenses — that is, to support IT systems that are still critically dependent on 8-inch floppy disks and outdated programming languages. 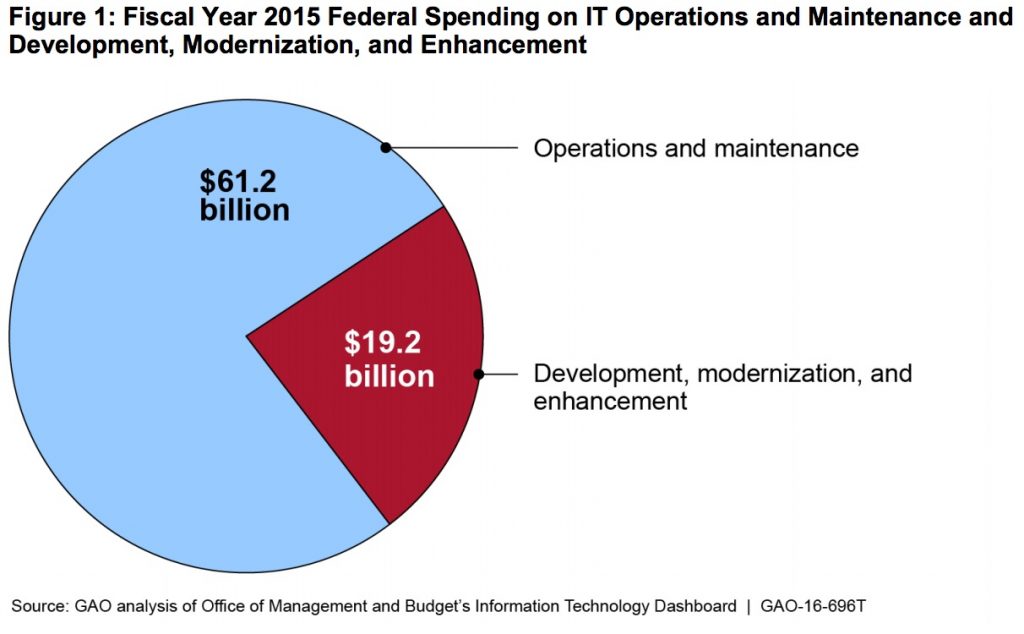 To make matters worse, the percentage of IT spending on O&M expenses has risen from 68 percent of the total budget in fiscal year 2010 to a projected 77 percent in fiscal year 2017, while Development, Modernization, and Enhancement investments have decreased $7.3 billion since 2010. 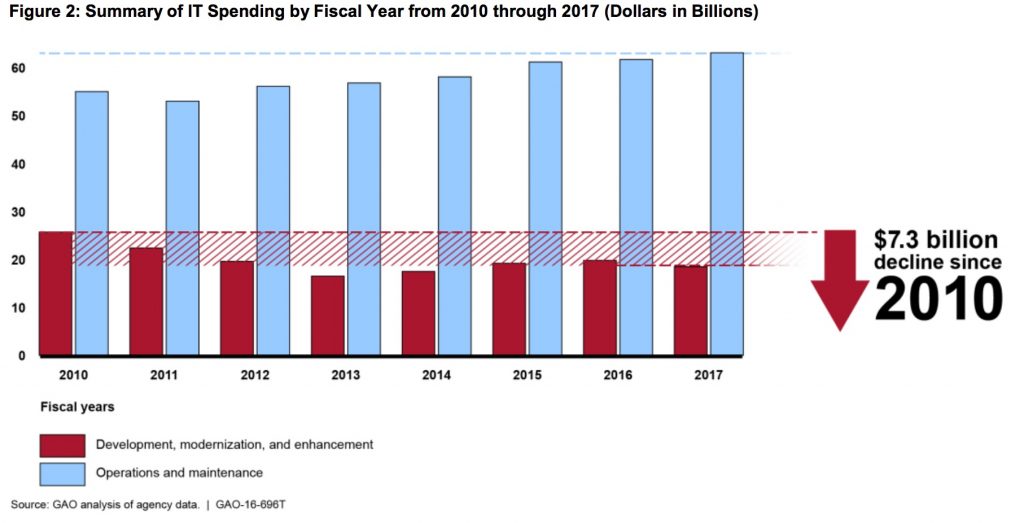 While not to the same scale and degree as the federal government, a similar imbalance in IT investments exists at many companies. In a January 2013 CIO Journal post titled “When Companies Become Prisoners of Legacy Systems,” Adam Schneider, principal and chief advisor for Deloitte Center for Financial Solutions, writes:

Many companies that have been in business for 30 or more years are using software built or purchased during the Jimmy Carter and Ronald Reagan administrations…In many cases, these systems have difficulty scaling. They strain to support the complexity and variety of current products and services. And their functionality has not kept pace with the times…Further complicating matters, companies saddled with decades-old systems cannot easily replace them. Legacy hardware and software platforms often form the bedrock of their operations. Moreover, companies have incrementally enhanced these systems over many years, to the point where they are exceedingly complex and almost impossible to duplicate with a replacement.

At the recent JDA FOCUS conference, for example, a logistics executive at a leading consumer goods company provided an overview of the company’s cloud deployment of JDA’s warehouse management system (WMS). “The last time we implemented a WMS I was in middle school,” he said, which based on his age was at least 20 years ago. The company’s old WMS had simply reached the breaking point: it was too customized and too rigid to meet the ever-changing needs of its distribution operations. But making the decision to replace the legacy solution required a mind shift by everyone from IT to operations. “We had to go from thinking ‘What if something goes wrong?’ to ‘What if it all goes right?’” the executive said, and based on the success of the implementation, a lot has gone right so far.

The need for flexibility and scalability is another reason why we’re seeing many third-party logistics providers (3PLs) in the process of deciding whether to keep investing in their own proprietary IT solutions or move forward with third-party applications (for related commentary, see Is Every Company a Technology Company?).

Of course, at the other extreme there is an equally costly and risky path some companies take: pursuing the next big new shiny thing — such as Big Data and Internet of Things — without a clear purpose or strategy. That is, companies investing in IT solutions in search of problems. (For related commentary, see Forget Innovation, Just Execute Better)

The goal is to get the balance right on IT investments and it begins by asking and answering some basic questions:

And if you’re looking for a theme song to inspire you, here’s my choice: “Get the Balance Right” by Depeche Mode. It was released in 1983, the same year some of your IT systems might have been deployed.

PrevPreviousThis Week in Logistics News (May 23-27, 2016)
NextHow to Capture Full Divestiture Value with a 3PLNext