One of my predictions for 2013 was that we would see increased adoption of alternative fuel vehicles this year, including trucks powered by natural gas. The news from recent days and weeks suggests that this prediction is coming true.

Last week, for example, UPS announced that it plans to buy about 700 liquefied natural gas (LNG) vehicles and build four refueling stations (in Knoxville, Nashville and Memphis, Tenn., and Dallas, Texas) by the end of 2014. Here are some comments from Scott Davis, UPS Chairman and CEO:

“LNG [liquified natural gas] is a good alternative to petroleum-based fuel for long-haul delivery fleets as it is abundant and produces reduced emissions at less cost. At UPS, we are helping to knock down some of the biggest hurdles to broad market acceptance of LNG in commercial transportation by continuing to establish vehicle demand, fuel and maintenance infrastructures. We plan expansion through infrastructure partnerships and a broader fleet in states that are leading the way to make alternative fuel vehicles economically feasible.”

One of the key constraints in using natural gas trucks for long-haul shipments is the lack of filling stations. As of May 2012, there were only 53 LNG filling stations in the United States, compared with 157,000 selling gasoline. Analysts estimate that it will take about $60 billion to build a critical mass of LNG filling stations across the country.

But progress is being made on that front too. Shell and Travel Centers of America, for example, announced on April 15th an agreement to develop a nationwide network of liquefied natural gas fueling centers for heavy-duty road transport customers. Here’s an excerpt from the press release:

The plan is to construct at least two LNG fueling lanes and a storage facility at up to 100 existing TA and Petro Stopping Centers branded full service travel centers along the U.S. interstate highway system. Construction and opening of the LNG stations will be done in a phased approach. Pending customary approvals, we anticipate the first of these stations will be operational in roughly one year’s time with a priority to develop the main trucking corridors to provide the potential for the first-ever coast-to-coast LNG-fueled commercial transport network.

And here’s an overview of the proposed network: 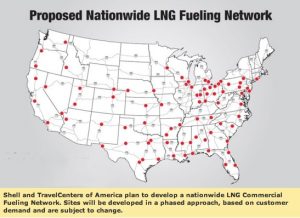 Have we reached the tipping point for greater adoption of LNG long-haul trucks? Not yet, but we’re getting closer every day — as long as the price difference between natural gas and diesel, currently about $1.50 per gallon difference, stays large enough to cover the higher price for LNG-powered trucks (between $40,000 and $80,000 per vehicle) and other ancillary costs.

For additional insights on this emerging trend, check out the articles below published in recent days, as well as the guest commentary written by Jason Craig at C.H. Robinson that we published back in February (C.H. Robinson is a Logistics Viewpoints sponsor).

What are your thoughts on this topic? Are you looking to add alternative fuel vehicles to your fleet or operations this year? Post a comment and share your viewpoint!

PrevPreviousRetailers: The Path to Executing a Smarter Supply Chain Network
NextThis Week in Logistics News (April 29 – May 3, 2013)Next