The iPad is replacing paper in many areas of life, except one, as this funny video points out.

Now, on to this week’s news…

Many ERP vendors that specialize in serving the mid-market lack transportation management capabilities. Meanwhile, many transportation management system (TMS) vendors are looking for ways to further penetrate the small and midsize segment of the market, which presents a significant growth opportunity. So ERP and TMS vendors are joining forces, as this week’s announcement by International Business Systems (IBS) illustrates. IBS announced a partnership with MercuryGate International “to bolster its TMS capabilities in IBS Dynaman (Warehouse Management) and IBS Enterprise (Enterprise Resource Planning) software.” According to the press release, “MercuryGate TMS solutions will be integrated into the IBS Business Suite, serving customers in key verticals like pharmaceuticals, food & beverage, automotive aftermarkets, 3PL and wholesale distribution.”

On the third-party logistics (3PL) front, after a year of preparation and trial operation, Menlo officially launched its freight brokerage service in Europe. Here are some details from the press release:

[Menlo Freight Brokerage], at the end of its trial period is now managing over five hundred shipments per month across all types of freight and modes of transport including: truckloads, parcels, groupage, full containers and LCL, air freight and ocean shipments. The majority of the volume has been intra-Europe in extent but Asian and North American destined cargo has also been handled.

[Tony Gunn, managing director for Menlo Logistics in Europe] added that Menlo expects a rapid growth in volumes in the future but for the modal mix to be in line with that experienced so far.

This announcement underscores two important trends in the 3PL industry: brokerage is becoming a “must have” service for 3PLs if they want to meet the full transportation needs of their clients, and 3PLs (especially North American-based ones) are looking to Europe for growth. Over the past few years, for example, C.H. Robinson has made several acquisitions in Europe, including Polish freight forwarder Apreo Logistics in 2012, and the company now has 51 offices and over 1,000 employees throughout the region.

Expanding globally and introducing new services are two common ways for 3PLs to drive growth. But there’s another path to growth few 3PLs have taken: penetrating the mid-market. As the chart below illustrates, the majority of small and mid-sized shippers still don’t have a transportation management system and they still manage their operations in-house. For a variety of reasons (high cost of sales being one of them), most TMS vendors and 3PLs have historically underserved this segment of the market, focusing their sales efforts on large shippers instead. But as the news above illustrates, TMS vendors like MercuryGate, 3Gtms, LeanLogistics, and others are now going after this market opportunity. When — and how — will 3PLs? 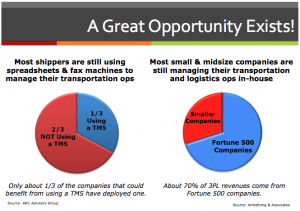 In trucking news, the U.S. Department of Transportation’s Federal Motor Carrier Safety Administration (FMCSA) announced “a proposal to require interstate commercial truck and bus companies to use Electronic Logging Devices (ELDs) in their vehicles to improve compliance with the safety rules that govern the number of hours a driver can work.” The proposal includes provisions to “respect driver privacy by ensuring that ELD records continue to reside with the motor carriers and drivers,” and “protect drivers from harassment through an explicit prohibition on harassment by a motor carrier owner towards a driver using information from an ELD” (see press release for more details). The final rule will be published later this year, which means the rule will go into effect by the second half of 2016.

Nothing is truly free in business, especially shipping. Somebody has to pay UPS, FedEx, and USPS — and that somebody, either directly or indirectly, is often the consumer. Amazon’s Prime program, which offers members free two-day shipping, has been a huge success for the online retailer. But as ABC News reported this week, one customer is accusing Amazon of deception:

Marcia Burke of Alabama says she became an Amazon Prime member and used its “free shipping” service at least 18 times in 2010…In what she hopes will be certified as a class-action lawsuit, Burke accuses Amazon of encouraging third-party vendors to increase their prices to Prime members by the amount they charged others for shipping, without revealing that a portion of those alleged “inflated” prices was for shipping fees, the lawsuit claims.

If the accusation is true, the practice is no different than what retailers already do around holiday markdowns. As the Wall Street Journal reported last November in The Dirty Secret of Black Friday ‘Discounts’:

The common assumption is that retailers stock up on goods and then mark down the ones that don’t sell, taking a hit to their profits. But that isn’t typically how it plays out. Instead, big retailers work backward with their suppliers to set starting prices that, after all the markdowns, will yield the profit margins they want.

The red cardigan sweater with the ruffled neck on sale for more than 40% off at $39.99 was never meant to sell at its $68 starting price. It was designed with the discount built in.

Like I said, nothing is truly free in business.

Finally, according to a Reuters report, “U.S. President Barack Obama and European Union leaders will promise to remove all tariffs on bilateral trade at a summit on March 26, an ambitious step towards the world’s largest free-trade deal.” The US-EU trade agreement and Trans-Pacific Partnership are dominating the global trade headlines these days. As luck would have it, my guest this coming Tuesday, March 18 on Talking Logistics will be Pete Mento, Director Global Customs and Trade Policy at C.H. Robinson. He will provide an update on TPP and the EU-US free trade agreements, and discuss the key issues and opportunities associated with them, and what supply chain and logistics executives should expect and do in the weeks and months ahead. I encourage you to join the conversation on Tuesday.

And with that, have a happy weekend.