With almost 2 feet of snow on the ground, the Blizzard of 2015 hit us hard here in Boston, but I was prepared with my “Made in Cuba” snow shovels. With more snow in the forecast for this weekend, I’m ordering a few more pairs for my neighbors right now. #CubanLivingInNewEngland.

In other news this week…

The second most popular blog post that we published last year on Talking Logistics was Wearable Devices: The New User Interface for Logistics Software, where I highlighted the emergence of next-generation wearables in the warehouse that combine smart glasses with voice recognition, video, GPS, scanning, and other capabilities. “Will wearable devices make us more productive? Are they a better way to work, or just a different, more fun way? Like all technologies, wearables will not be the ideal solution in all use cases, but I believe they will play a bigger role in logistics in the years ahead.” That’s what I wrote a year ago, and this week DHL provided some answers, announcing the results of a successful pilot project testing smart glasses and augmented reality in a warehouse in the Netherlands. Here is an excerpt from the press release, along with an infographic summarizing the pilot test and results:

In cooperation with DHL customer Ricoh and wearable computing solutions expert Ubimax, the technology was used to implement ‘vision picking’ in warehousing operations. Staff was guided through the warehouse by graphics displayed on the smart glass to speed up the picking process and reduce errors. The pilot proved that augmented reality offers added value to logistics and resulted in a 25 percent efficiency increase during the picking process. 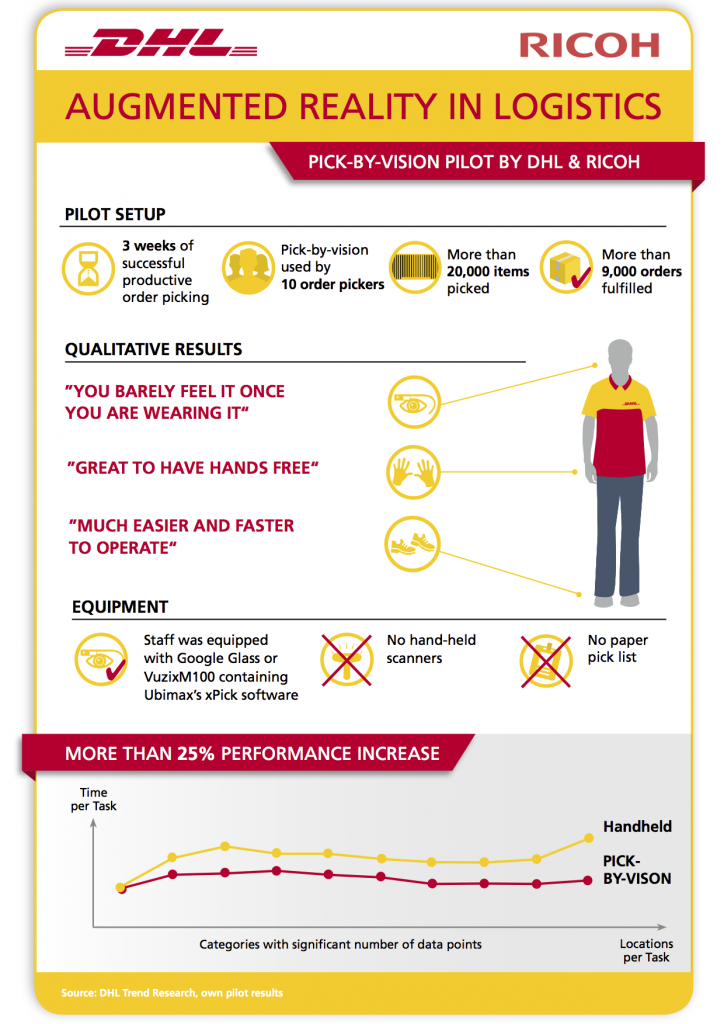 The DHL website has a short video showing the technology in action. Watching the warehouse worker with the smart glasses on, and seeing the displays and data popping up in his field of vision, reminded me of the movie The Terminator, where the cyborg played by Arnold Schwarzenegger uses augmented reality vision (as seen in this movie clip) to find his target. I’ll just repeat what I said last year: I believe robots will take over many logistics jobs in the future, but before we get there, a new species will emerge, a hybrid of man and machine that may actually turn out to be the best of both worlds.

Over the past few years, I’ve written extensively about the role of social networking in supply chain management (see, for example, A Pulse on Social Networking for Supply Chain Management and HP’s New Style of IT: The Social Supply Chain). We’re still in the early adopter phase, but case studies keep emerging, such as the news this week (as reported in The Telegraph) that Tesco “has created the Tesco Supplier Network, which it claims will help 5,000 members to communicate with the retailer and other suppliers about a broad range of issues.” Here are some more details from the press release:

The supplier network was created by Jason Tarry, Tesco’s new commercial director…Mr Tarry said: “This new community of Tesco teams, suppliers and producers from around the world gives us the opportunity to improve communication, share ideas and continually improve the products that our customers enjoy. The network will play an integral part in our partnerships with suppliers to deliver for our customers.”

As I wrote a few weeks ago in Facebook for Supply Chain Communication and Collaboration, communication and collaboration — especially, and most importantly, between people — is the foundation of supply chain management, and you can’t effectively innovate without that strong foundation. I firmly believe that Companies of Tomorrow will embrace social networking to communicate, collaborate, and execute business processes in more efficient, scalable, and innovative ways, while Companies of Yesterday will remain mired in emails and meetings, and suffer from slow decision-making processes. That’s going to be one of the key messages I will share with the audience at the Logistics Summit & Expo (March 18-19 in Mexico City, Mexico). If you plan to be at the conference, please attend my session — Are Your Ready for the Social Supply Chain? — and participate in the conversation!

Earlier this month in his State of the Union address, President Obama asked Congress to grant him “fast-track” trade authority, which would help facilitate free trade agreement negotiations, specifically the Trans-Pacific Partnership (TPP) and US-EU trade agreements. Not surprising, the battle lines have been drawn between those in favor of free trade agreements (most Republicans and many businesses) and those against them (most Democrats and labor unions). The battle will begin in February when leaders in the Senate will introduce a bill on fast-track authority. Stay tuned. In the meantime, watch our most popular episode from last year to learn more about this topic: The Latest on Trans-Pacific Partnership and US-EU Trade Agreements.

Song of the Week: “Strong” by London Grammar