Fidel is dead. I am only sad that my father did not live long enough to hear those words.

What does the future hold for Cuba and my family there? I go back to what I said last year when people were asking me what I thought about President Obama normalizing relations with Cuba: I really don’t know what to think. My brain tells me one thing, my gut another. Which do I trust?

This I know: Unless you have lived in Cuba or have family still living there, you know nothing about the realities there.

Moving on, here’s the supply chain and logistics news that caught my attention this week:

Transplace’s strategy is very focused on building out its transportation management technology and services in North America, and in recent years it has expanded its capabilities in Mexico and Canada both organically and via acquisitions. This week the company announced that it has acquired Lakeside Logistics, a Canadian-based logistics services company. This follows Transplace’s  acquisition of Canadian third party logistics provider Torus Freight Systems in 2012, and the opening of offices in Calgary and Montreal in 2014. Here’s what Transplace CEO Tom Sanderson had to say about the acquisition:

“Acquiring Lakeside Logistics further supports Transplace’s commitment to strategic growth in order to build a competitive advantage for our company and our customers. The addition of Lakeside Logistics complements Transplace’s current geographical footprint as well as the company’s mission to deliver outstanding transportation management, intermodal, brokerage, and cross-border trade management services to shippers across North America.”

If President-elect Trump follows through in his campaign promise to renegotiate NAFTA, which seems likely based on comments made this week by Wilbur Ross (Trump’s selection to lead the Commerce Department), what impact will that have on trade flows between the U.S., Canada, and Mexico — and to third-party logistics providers that manage the movement of goods between the three countries?

The trend over the past 24 months has been negative, with the total value of cross-border freight declining from the same month of the previous year in 20 of the past 21 months beginning in January 2015, according to U.S. Department of Transportation’s Bureau of Transportation Statistics. In September 2016, total freight on all modes decreased 2.3 percent to $91.1 billion in current dollars compared to September 2015. 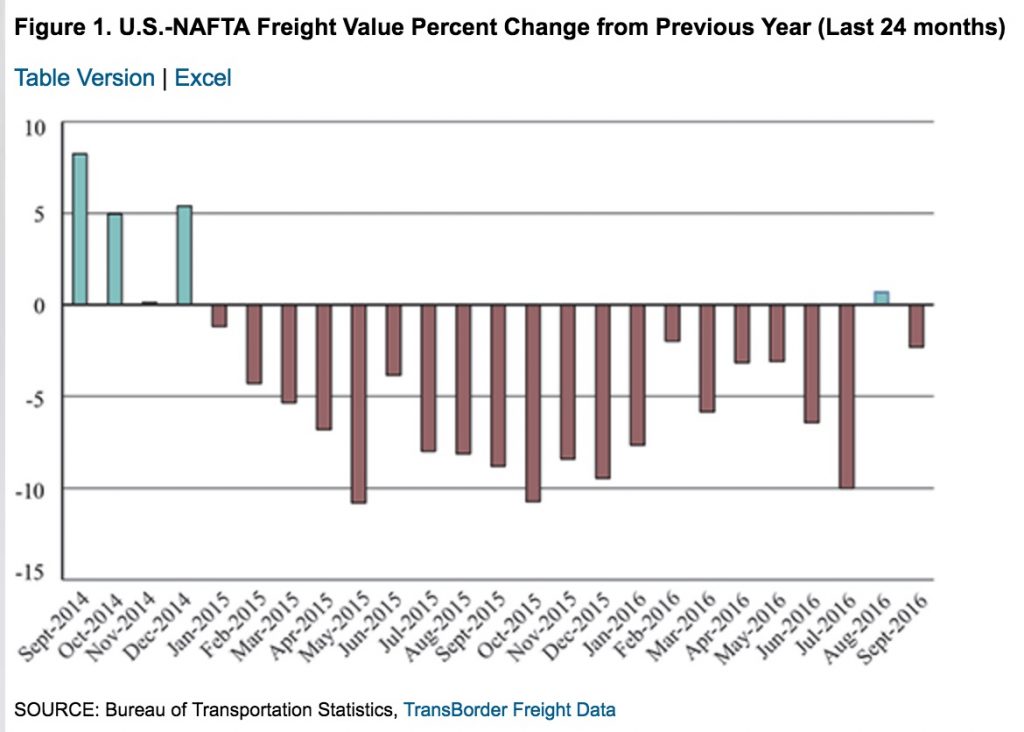 In short, with potential changes to NAFTA, the likely death of the Trans-Pacific Partnership agreement, and rising protectionist measures by G20 economies, there’s a lot of risk and uncertainty surrounding global trade heading into 2017.

Shifting gears to technology, another example of blockchain technology making its way into supply chain applications. This week The Mahindra Group, one of the largest diversified multinational group of companies based in India, and IBM announced the development of a blockchain solution that has the potential “to reinvent supply chain finance across India by enhancing security, transparency and operational processes.” Here are some details from the press release:

This cloud-based application, one of the first projects of its kind in India outside of traditional banking, is designed to transform supplier-to-manufacturer trade finance transactions through a permissioned distributed ledger. The blockchain-based supply chain finance solution will enable all parties involved in the transaction to act on the same shared ledger, with each party updating only their part of the process, ensuring efficiency, consistency, trust and transparency, while safeguarding sensitive information.

Yes, there continues to be a lot of buzz and hype about blockchain technology, but if Walmart, Toyota, and USPS (among other companies and entities) are taking a serious look at leveraging this technology to improve their supply chain processes, you can’t afford to ignore it completely.

Song of the Week: “Human” by Rag’n’Bone Man