Research in Focus: Do You Get What You Pay For in Truck Transportation?

Editor’s Note: Our “Research in Focus” series highlights research conducted by select partners and provides our perspective on some of the most interesting findings and results.

That was one of the research questions explored by Nane Amiryan and Sharmistha Bhattacharjee, graduate students at MIT’s Center for Transportation & Logistics (MIT CTL), in a project sponsored by C.H. Robinson. The researchers used 27 months (2013–Q1 2015) of tender and shipment records for dry van truckload shipments from TMC, a division of C.H. Robinson (a Talking Logistics sponsor), to control for economic cycles. Only single stop loads between 250 miles and 3,000 miles within the continental United States were considered. The dataset included tender information from 40 shippers and 963 carriers, with more than 1.7 million shipment tenders to secure the movement of 807,662 shipments.

The chart below highlights their findings: 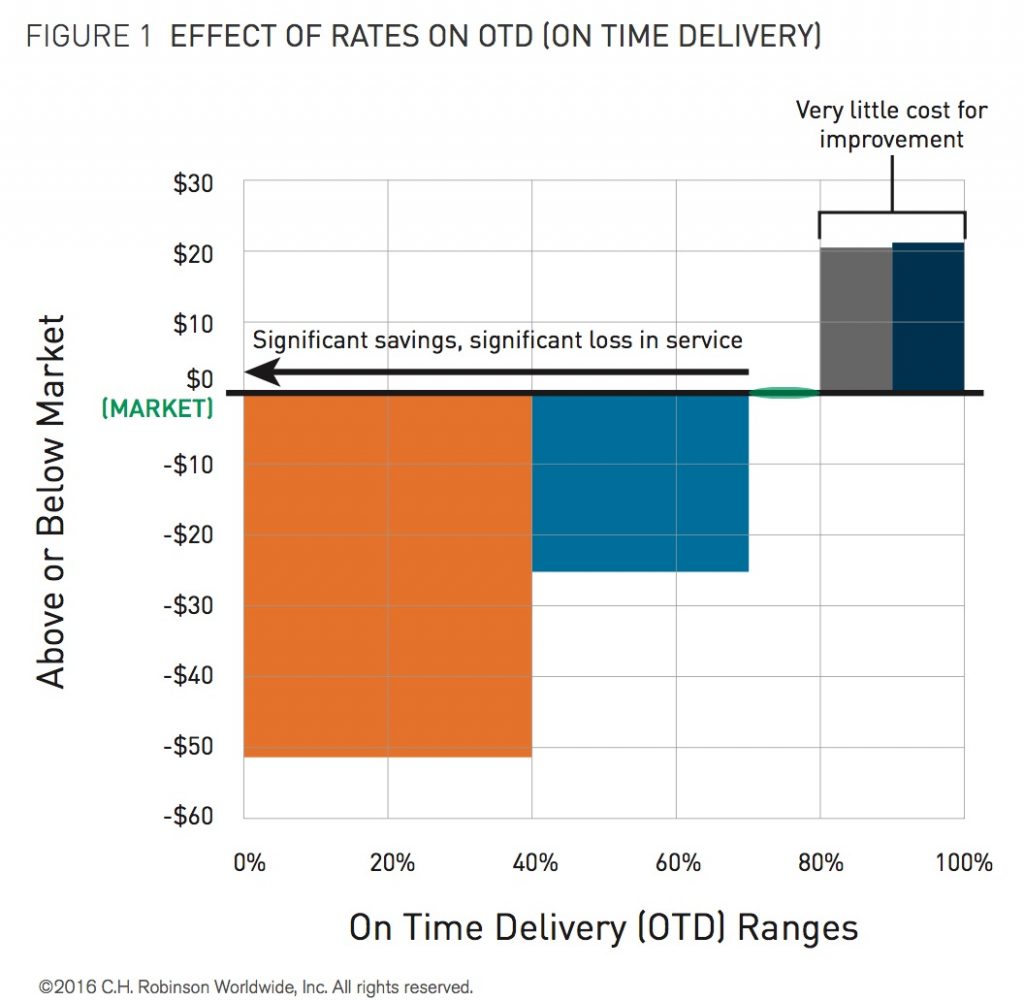 There was no relationship found between on time pickup (OTP) and freight rate. Rates had more impact on on time delivery (OTD) than OTP, but the correlation was weak.

As Figure 1 shows, carriers with OTD percentages below 70 percent charge less for their services. This shows that shippers who always choose the lowest-cost carrier are most likely to get what they pay for. Shippers who had OTD in the 70 percent and 80 percent range paid market rates.

Those with OTD between 80 percent and 90 percent paid just over a $20 premium. On average, there was almost no additional premium to reach the 90 percent to 100 percent OTD range.

For me, the results underscore the importance of benchmarking and understanding market rates — otherwise, you wouldn’t know if you’re significantly overpaying your carriers (which buys you nothing or very little relative to OTD) or significantly underpaying them (which negatively impacts OTD). Just like Goldilocks had to find the porridge that wasn’t too hot or too cold, or the bed that wasn’t too hard or too soft, shippers need to find the rates that are not too high or too low but “just right” relative to meeting their cost and service objectives. This requires taking an informed and collaborative approach to transportation procurement. For related commentary, see my post from earlier this year, Time to Squeeze Carriers for Better Rates?

Also, it’s important to note that poor on time delivery performance can result in significant cost penalties from customers, thus wiping out the money saved by using less expensive carriers. For example, consider the changes Walmart is making to its Must Arrive By Date (MABD) delivery expectations. As reported in Logistics Management:

Effective February 2017, Walmart is going to require its suppliers (shippers) to meet a two-day shipping window instead of its previous four-day window, as well as up its required compliance rate from 90 percent to 95 percent.

The MIT researchers also explored another question: Does paying higher rates to truckload carriers yield better load tender acceptance? Download the report for the answer, plus other insights the researchers uncovered.

PrevPreviousI Will Be Wrong Again: Supply Chain and Logistics Predictions for 2017
NextTop 10 Talking Logistics Videos and Posts in 2016Next