This is a drawing of me, through the eyes of my oldest daughter when she was 2 years old. 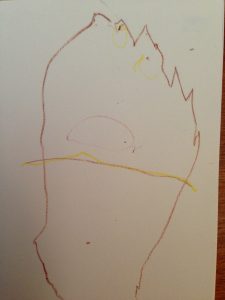 Today she graduated from 8th grade, and I am officially the parent of a high schooler.

The Council of Supply Chain Management Professionals (CSCMP) released its 25th Annual “State of Logistics Report®”, presented by Penske Logistics this week. Here are some highlights from the report:

I always have mixed feelings about this report. On the one hand, it serves an important role by quantifying the state of the U.S. logistics industry, and we all know that you can’t manage what you don’t measure. The report also serves as a catalyst for discussion, debate, and inquiry. Ask a hundred people “What is the state of logistics?” and you might get a hundred different answers. But on the other hand, we’re almost halfway through 2014, and what happened last year is less interesting for supply chain executives than what’s happening right now — and what might happen in the weeks and months ahead.

Looking in the rearview mirror and putting last year in historical perspective is interesting, but if you take your eye off the road ahead for too long, you might end up in a ditch.

Following FedEx’s lead from last month, UPS announced this week that beginning December 29, 2014, in the United States, it will use dimensional weight to calculate the billable weight of a shipment on all UPS® Ground services and UPS® Standard to Canada packages. Echoing my comments about the FedEx announcement, the company says in the press release that as a result of the dimensional weight pricing method, it believes “more shippers will seek to optimize their packaging practices, [which] will reduce excess packaging materials and overall package sizes, leading to related reductions in fuel use, vehicle emissions and transportation costs.”

Last week, I wrote about how the process industry is moving up the supply chain maturity curve, even though most analysts and industry publications aren’t noticing because they’re hyper-focused on what’s happening in retail, high tech, and consumer goods. A great example of innovation in action is GE’s announcement this week that its its new “Elastic Cloud Supply Chain Platform” (Elastic Cloud) for real-time management of oil and gas materials, equipment and services won a prestigious Manufacturing Leadership 100 (ML 100) award. Here are some details from the press release:

The development of the Elastic Cloud technology represents a collaborative effort between GE Global Research, the Company’s technology development arm, and GE Oil & Gas. The software is designed to monitor, manage, and optimize the sourcing, production, flow and inventory of complex oil and gas raw materials, components and final products for installation and servicing at customer sites.

One module provides end users with a “control tower” view of current inventory positions and enables users to pinpoint specific opportunities for inventory reduction. Information displayed in this system was previously only accessible by opening up multiple reports and queries.

Why did GE develop this solution in-house? I hope to have someone from GE as my guest on Talking Logistics soon to answer that question, but maybe software vendors and the 3PL industry aren’t showing the process industry enough love either. Or maybe when it came down to making the build vs. buy decision, the scales tilted in favor of owning the innovation cycle. Or maybe when making the insource vs. outsource decision, GE — like a growing number of companies today — opted to keep control.

On the trucking front, the American Trucking Associations’ advanced seasonally adjusted For-Hire Truck Tonnage Index increased 1 percent in May. The index is off just 1 percent from the all-time high in November 2013. Here are some comments from ATA Chief Economist Bob Costello:

“I’m pleased at the direction of freight, highlighted by May’s fourth consecutive gain in tonnage totaling 4.5%. While the year-to-date improvement is running behind last year’s robust 6.3% increase, gains this year are more broad-based. It isn’t just heavy freight for sectors like tank truck and flatbed from energy and housing that are improving this year. Now, generic dry van trailer freight is doing better as well, which wasn’t the case in 2013. This is a good sign for the economy.”

Compared to the same time last year, truckload linehaul costs in May averaged 5.8% higher – an increase that is consistent with those of the previous two months (5.7% in April and 6.0% in March). With demand improving and capacity exiting the marketplace at a faster pace, the 2014 bid season (~70% of all contracts are negotiated in the first 4 months) has resulted in higher truckload costs for the shipper. Industry analyst firm Avondale Partners expects truckload pricing to increase 4-6% in 2014.

Finally, in case you’re still managing your global trade compliance processes with spreadsheets, here’s another example of the unnecessary risks you’re taking. According to a Reuters report, “Intersil Corp has agreed to pay a civil penalty of $10 million to settle 339 alleged violations of U.S. export control laws that potentially harmed U.S. national security, the State Department said on Wednesday.” Here are some more details from the article:

Certain circuit components used on satellites were exported, re-exported or retransferred to entities on the government’s watch list, including some that were “known front companies” for customers in countries such as China that are banned from getting U.S. weapons exports, it said.

I don’t know how Intersil was (or was not) managing its trade compliance process, but as I’ve written before, many companies view trade compliance as simply paperwork and a cost center, and they are not investing adequately in software technology to help them streamline, automate, and control their global trade processes. Is your company falling short in this area too?

Song of the Week: “Once in a Lifetime” by the Talking Heads

PrevPreviousTransformation: From Siloed Business to Hyperconnected Networks
NextFinding Carriers in a Capacity-Constrained MarketNext