My 15 year old Subaru has a parasite. Well, technically, a “parasitic drain” on the battery. That’s what the AAA guy who came yesterday afternoon to jump start my car told me. The car is dead again this morning. I don’t have the time, tools, or knowledge to deal with this parasite, which is the latest ailment my car suffers from (the air conditioner crapped out a couple of years ago and I had to get the exhaust pipe repaired after it broke off on my way to the airport some months ago). So, I will ride my bike today, and maybe tomorrow too, as I come to terms with a painful reality: the time to say goodbye to my beloved, beat up car is nearing. 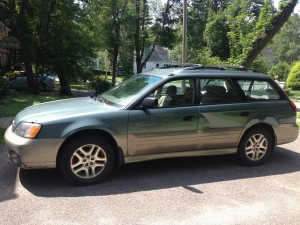 Yes, it’s just a car — metal and plastic and rubber and electronics — but I’ve spent a third of my life, starting a month before my oldest daughter was born, driving it. More than 110,000 miles of commuting to work, driving to Little League baseball games, soccer matches, and swim meets, going on vacation, visiting family, bringing the kids to school, and other daily excursions. The car itself didn’t create many memories, but it brought us back and forth from the places and events that did. And so many of the hours and miles we spent inside that car were filled with laughter and song, with silence and sleeping kids, with looking out the window at the world whizzing by us…

Tomorrow, I’ll jump start the car again and drive it to my mechanic to find this parasite. I’ll take the long route there, with the windows rolled down, and I’ll find an empty street and blow the horn for no reason, long and loud, long and loud, the wheels turning slowly forward.

Now, this week’s supply chain and logistics news, which was dominated by transportation-related items:

Last month, C.H. Robinson and the Boston Consulting Group published a research report on the potential impact the Panama Canal expansion could have on logistics strategies and operations (watch my conversation with two of the authors in a recent episode of Talking Logistics). One of the key findings was that up to 10 percent of container traffic to the U.S. from East Asia could shift from West Coast ports to East Coast ports by 2020. Well, the global trade data firm Zepol published a report this week that shows this shift is already happening. Here is an excerpt from the company’s blog post:

Zepol found that a hefty chunk of businesses have switched from using Pacific to Atlantic and Gulf ports this year. Total imports along the East Coast have increased by 15 percent, while import traffic on the West Coast is down 4 percent.

It’s crazy to think that freight going all the way from Asia to Eastern and Gulf ports is the best option for some importers, but China is actually the main instigator behind the supply chain shift. Imports from China along the West Coast declined by 3 percent, but Chinese imports on the East Coast continue to skyrocket. Atlantic ports increased containers from China by 20 percent this year, and Gulf ports by a more dramatic 43 percent.

And here’s a chart they included in the post:

When it comes to transportation infrastructure funding, it’s the same old story. With a July 31 deadline to extend highway funding, the House approved this week an $8 billion bill to extend federal transportation funding through December 2015 — the 34th highway funding patch since 2005. The 34th time in a decade that Congress has “kicked the can” down the road in passing a long-term funding bill. I’m betting we’ll see a 35th short-term patch in December. For related commentary, see my February 2014 post Enough Talk: Time to Fix Transportation Infrastructure Funding.

Finally, the American Trucking Associations (ATA) reported this week that “annualized turnover rates at large and small truckload fleets each fell 12 percentage points in the first quarter of the year…annualized turnover at truckload fleets with more than $30 million in revenue fell to 84%, the lowest it has been since the second quarter of 2011 and marks the first time the rate fell below 90% since 2011.” Could this be the result of higher driver pay and other retention actions trucking companies have implemented? Or is it due to a temporary slowdown in freight movements in the quarter? Although the decline in turnover rate is good news, 84 percent is nothing to celebrate. That’s still a very large turnover rate, and the challenge of finding and retaining safe, experienced drivers remains.

Song of the Week: “Drive” by The Cars.