1,183 — that is how many miles I have cycled since the start of the summer, including 82 hilly miles I cycled this past Wednesday, which took me 5 hours and 22 minutes to complete. All of these miles are in preparation for the 102.7 miles I will ride next Saturday with my Logistics Leaders for Type 1 Diabetes Cure teammates at the JDRF Death Valley Ride in California. 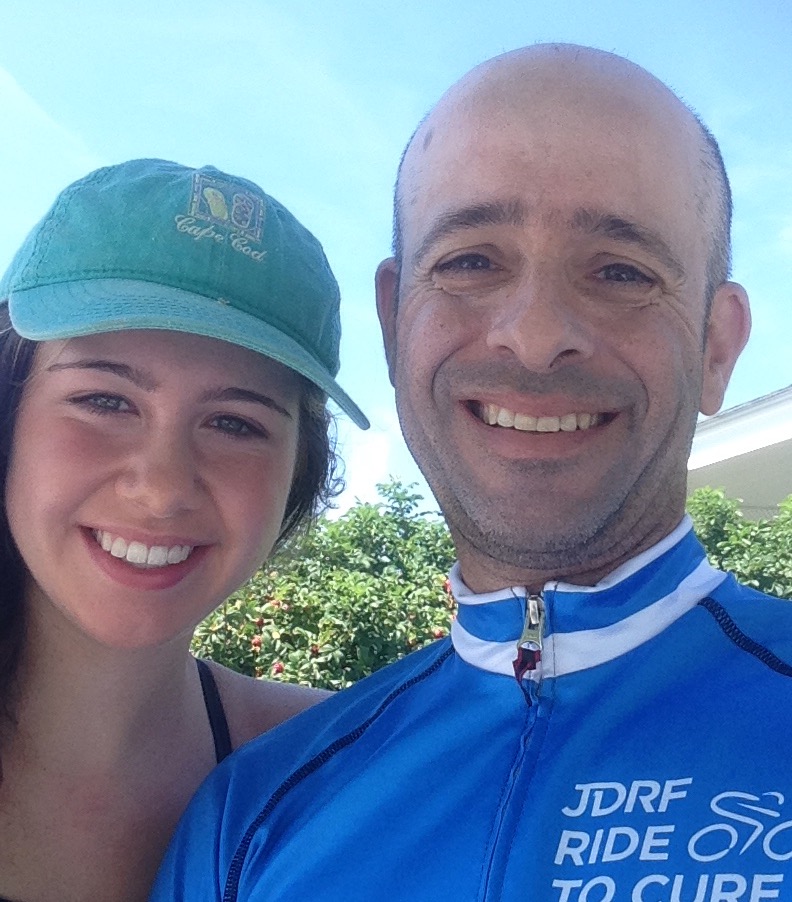 $41,997 — that is how much money our team has raised so far for T1D research in our quest to help turn Type 1 into Type None. Just last week, a significant milestone was achieved: the FDA approved the first “artificial pancreas” device, a closed-loop system comprised of a continuous glucose monitor, insulin pump, and control algorithm. This innovation, which will help ease the burden for those living with T1D, took many years and millions of dollars to achieve. It is going to take several more years and millions of dollars more to bring other promising technologies to market and to find a cure, which is why the money we raised is so important.

Why do I do this? She’s standing next to me in the nearby photo. My daughter was diagnosed with T1D on October 4, 2011 — five years ago this week at age 11. If I were to come across a Candy Chang “Before I die..” chalkboard, I would pick up a big yellow chalk and write in big bold letters, “Before I die I want to see my daughter living healthy and happy without the burden of Type 1 diabetes.”

A big thank you to our team sponsors Descartes, Elemica, LeanLogistics, and MercuryGate for their generous donations, and a big thank you to their employees (and my teammates) Ken Wood, Charity Newsome, James Coon, and Gina Pratico for the many miles and hours they have invested over the past few months to train for this ride, and to our many friends and family members who have also donated to the cause, including many from the logistics community. If you’re interested in donating to help us reach our $50K goal, please visit my site.

I’ll share photos and more from our ride in a future post. In the meantime, here’s the supply chain and logistics news that caught my attention this week:

There was a bit of a lull in M&A activity in the third-party logistics (3PL) industry in recent weeks, but maybe things are about to heat up again. DHL Supply Chain announced this week its acquisition of MIT Safetrans, an Italian logistics provider for highly specialized and high added-value niche markets. According to the press release:

MIT, established in 1983, operates in all sectors where technology is present, among them hi-tech, pharmaceuticals, banking and vending. The distribution network comprises about 20 logistics centers through which MIT provides highly specialized pre- and post-delivery equipment services…MIT is also market leader in the highly specialized distribution of life-saving products such as radiopharmaceuticals. In 2015, the company reported revenues of 48 million Euros and an EBITDA of 6 million Euros, confirming a constant growth in income and revenue over the last few years.

Meanwhile, according to a Reuters report, “Denmark’s DSV, which became the world’s fifth largest freight transportation company by buying up competitors, is considering more large acquisitions to expand in a fragmented market despite weak growth in global trade.” Last October, DSV announced its acquisition of UTi for $1.35 billion. “We’ve come to realise that bigger acquisitions probably suit us better than smaller ones,” [DSV chief executive Jens Bjorn Andersen] said. “We will go for the big ones, if we can find them and convince the owners.”

How important is e-commerce to retail growth? Just follow the money — more specifically, where Walmart is investing its capital. As reported by Reuters:

The world’s largest retailer is now on track to double the number of giant warehouses dedicated to online sales to 10 by the end of 2016, according to Justen Traweek, vice-president of e-commerce supply chain and fulfillment.

At the same time, Wal-Mart in the last year has installed new technology such as automated product sorting and improved item tracking that for the first time puts them on par with Amazon’s robot-staffed facilities, according to supply-chain consultants.

“We have doubled our capacity in the last twelve months and that allows us to ship to a majority of the U.S. population in one day,” Traweek said.

Wal-Mart in the last four fiscal years has accelerated its investment in e-commerce and digital initiatives, excluding acquisitions, from about $300 million in 2013 to $1.1 billion this year for a total of about $3 billion, according to public filings and earnings transcripts. E-commerce accounts for about 3 percent of Wal-Mart’s overall sales [but it’s the fastest-growing segment of its business].

The ongoing growth of e-commerce is also driving FedEx and UPS to invest in their networks and in new technologies to better manage their operations, especially during the holiday season. As the Wall Street Journal reported:

FedEx is opening four new hubs and “dozens” of small, satellite facilities to receive, sort and ship an expected surge in packages between Thanksgiving and Christmas, executives said this week. UPS is expanding a network of temporary sorting hubs and is increasing its use of software to help sort packages faster, a spokeswoman said.

Both companies have also invested in automation so they can process more packages over the holidays while keeping staffing levels relatively steady.

Simply put, the retail transformation continues, which is also transforming the logistics industry. As I wrote last year, traditional distribution networks and processes were built around yesterday’s consumer — those who shopped almost exclusively at stores and malls, and who didn’t mind waiting 3-5 days for delivery — but new distribution networks and processes are emerging for a new generation of consumers, who will shop more online (especially on mobile devices) and expect same-day shipping and delivery, or click-and-collect within an hour, as a standard offering.

Finally, yet another study was published analyzing different mechanisms to fund highway transportation projects. The study — co-authored by Jerome Dumortier, an assistant professor in the School of Public and Environmental Affairs at Indiana University-Purdue University Indianapolis, and John Marron, formerly of the IU Public Policy Institute and currently working with IndyGo — found that adopting a vehicle mileage tax would best meet highway construction needs in the long run.

The debate around how to best fund transportation infrastructure projects is a never-ending one (see Enough Talk: Time to Fix Transportation Infrastructure Funding), but this sentence from the article about the study sums up the crux of the problem perfectly (emphasis mine):

In other words, we like to complain about the condition of our roads and bridges, but we oppose paying for their repair via any conceivable way possible. If we keep waiting, maybe they’ll just fix themselves, and if we’re really lucky, they’ll do it for free.

Song of the Week: “Swings and Waterslides” by Viola Beach